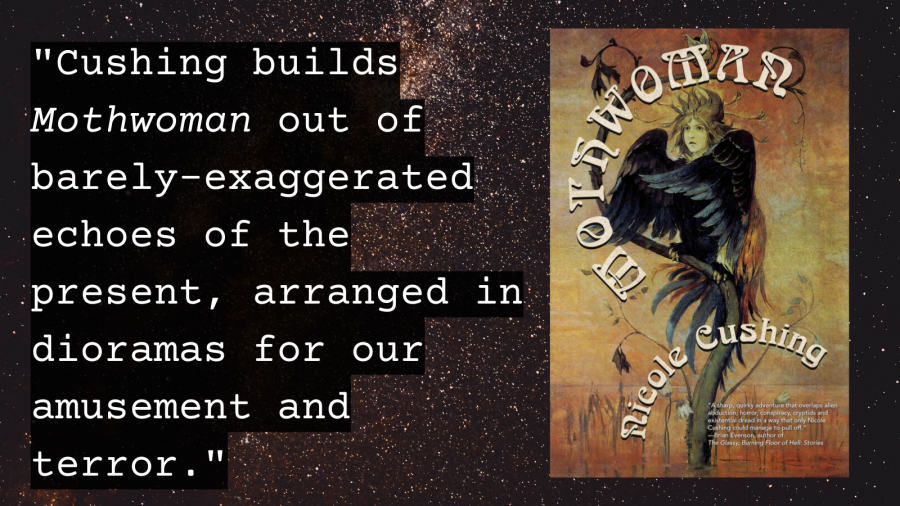 I maintain that the real magnetism of stories is to witness the author stitch themselves into their narrative. It is our job as the reader to watch this grotesque display, quell our discomfort, and then by the end, hopefully find some recognition. Even in horror fiction, where the author can display the worst of themselves, I always have this little yearning in my stomach to say: me too. This moment of recognition is what makes us swallow these bitter pills.

Nicole Cushing is one of those authors that has pulled those words from me time and time again. Her novel Mr. Suicide was a transgressive, Ligottian romp that demonstrated just how dark (and absurd) weird horror can get. Her novel A Sick, Gray Laugh was a bizarro autobiography complete with a compelling alternate history—and perhaps her most ambitious work to date. Her new novel, Mothwoman (Word Horde), is a further refinement of all the elements we’ve come to love in Cushing’s work—featuring high absurdity, strangeness, and the humanizing touch of a confessional.

To talk too much about Mothwoman’s plot is to give too much away. I will say this though: it is fucking weird. In the best way. Cushing weaves cryptids into the American political landscape, alongside Covid and outlandish conspiracy theories. What struck me most upon reading it, was how immediate and reactive it was. This is a novel about the last few years, encapsulating the Weirdening of our everyday reality. It wouldn’t be out of bounds, I think, to call Mothwoman a sublimated coping mechanism.

Despite all of the reality Cushing is dealing with through the novel though, I think it’s also fair to say that this is her lightest, breeziest book yet. The narrative flies past the reader, going full bore into gonzo insanity at a steady gallop. It’s also Cushing’s funniest book to date, to the point that I would consider it as much of an absurdist farce as I would consider it a horror story. In many ways, Mothwoman shares DNA with Vonnegut’s Slaughterhouse-Five—if not in exact subject matter, but in the way that it weaves comedic premises and dark autobiography to create an elevated genre fiction spectacle.

Mothwoman’s playful premise revolves around conspiracy theories, hidden identities, and a hilarious cryptid convention. In many ways, its structure takes our main character (who I can’t help but see as a stand-in for Cushing herself—in the best way) on a tour of the absurdities of the modern world. In the same way that the character is along for the ride, so are we. There’s a sense of funhouse curiosity, of the stops and starts of theme park rides, as we get to gaze in wonder at the stupidity of the unfortunately real world we live in. Cushing builds Mothwoman out of barely-exaggerated echoes of the present, arranged in dioramas for our amusement and terror.

But despite its comic nature, there is a bleak streak in Mothwoman (albeit less so compared to other works by Cushing), where trauma rears its head amidst insanity, and the whiff of dour, inevitable outcomes are a sobering reminder that while this is all funny, it’s also downright horrific. Mothwoman reads like a book written as a simultaneous escape, rationalization, and condemnation of a strange, cruel world.

This is all to say that it’s excellent. Mothwoman is a timely novel from one of our best and brightest. It’s a novel of futility, despair, madness, and it comes as a short, compelling read that never lets up on the gas. In a world that often seems like it’s falling apart, Mothwoman is an acknowledgement that sometimes, all you can do is laugh.